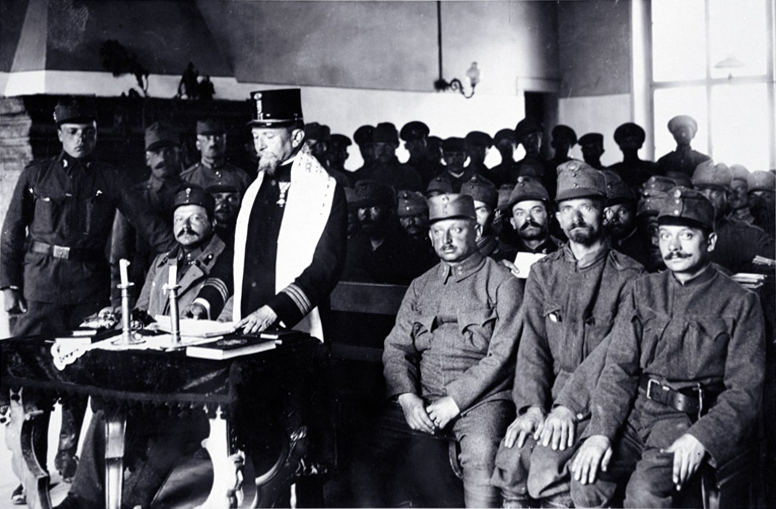 A Remembrance Day recipe inspired by Seudat Havra-ah – the first meal after a burial, the meal of recovery and condolence.

The conflict was grizzly. It is estimated that there were 40 million military and civilian casualties, with a range of 15 to 22 million deaths, and about 23 million wounded military personnel, making World War One among the deadliest conflicts in human history. It is an unbelievable sorrow.

I wanted to provide a recipe for Remembrance Day, known in the USA as Veterans Day, to memorialize the armistice signed ending the war.

“The Holocaust and the creation of the state of Israel — are almost unimaginable without World War I.”

The First World War also had an enormous impact on the Jewish world. So, I thought a little history with the help of Dr. Daniel Schwartz, associate professor of history and director of the Judaic Studies at George Washington University, would be fitting. As would a recipe inspired by foods usually provided during the Seudat Havra-ah meal.

Traditionally, circular-shaped foods such as bagels, chickpeas, lentils, garbanzo beans, cookies or cakes, are served as part of Seudat Havra-ah. Symbolizing the cyclical nature of life, and that birth and death each have a time and place. Hard-boiled eggs, beitzah, are most commonly served, which are also sometimes eaten as a reminder to mourn the destruction of the Beit Hamikdash, both the First and Second Temples.

Interestingly those same symbolic circle foods are also included on Shalom Zachar menus, which honors the birth of a son.

If you are drawn to adding an element of memorial via food for Remembrance Day and like the idea of using Seudat Havra-ah as inspiration, then really any circular food would work. Hard-boiled eggs are definitely the most traditional, and easiest, to add to a meal. While a bean-heavy chameen, or cholent, would work perfectly, too.

Ronald L. Eisenberg writes in Meal of Consolation (Seudat Havra’ah), “lentils are especially significant because, unlike most beans, they have no eye – symbolic of the deceased no longer being seen. Also, just as lentils have no mouth, so are mourners forbidden to open their mouths to greet people (Gen. Rabbah 63:14).

As for a recipe befitting the day? I decided on the symbolism of lentils as a somber reminder of the tragedy of the First World War. Also because of the connection that is made in that Bereishit Rabbah Midrash, that of “the deceased no longer being seen,” correlates with a somewhat lack of interest in the enormous impact and consequences WWI had on the Jewish world.

A note on beans. If you haven’t tried beans from Rancho Gordo, you must. Based in Napa and with shipping across the USA and Canada, they work with growers in Central California, Oregon, Washington, New Mexico, and with small farms in Mexico for their really rare crops through the Rancho Gordo-Xoxoc Project. Check out the Rancho Gordo website, they have the most extraordinary selection of Heirloom Beans anywhere.

The dish I chose is a Yotam Ottolenghi recipe that I often make, Confit Leeks With Lentils, Lemon and Cream. It is delicious, absolutely. And not only does it star lentils, but the other ingredients, especially garlic, leeks and lemons, have a special place in Jewish history.

Leeks are one of the vegetables for which the children of Israel craved during their journey in the wilderness from Egypt (Num. 11:5), while lemons are believed to have been introduced to Italy (the region we now call Italy) by Jewish immigrants, perhaps acquired by trading along the Silk Road, in the 1st century CE. And from there introduced to the rest of Europe. As for garlic… while, that’s actually an enormous story, so for another day.

The recipe is below. But first, a little history about the Jewish experience in WWI. Dr. Daniel Schwartz describes the often under-appreciated impact of the First World War on Jewish history. Including “how fears of Jewish disloyalty fueled deportations and massacres in Eastern Europe during and after the war, how the Jewish Legion helped conquer Ottoman Palestine for the British, and why World War I was a turning point for European Jewry.”

The First World War was a seismic shift in Jewish history; as Daniel Schwartz told Moment senior editor George E. Johnson, “I’ve always been struck by the degree to which this catastrophe seems to fly under the radar today.”

It is remarkable how many Jews enlisted, the numbers unprecedented, as was the scale of the conflict. Approximately a million and a half Jews fought in World War I for their respective countries. The American Jewish Committee’s Office of Jewish War Records estimated 3.4 million were living in the country during the war years, and 250,000 joined the military.

Schwartz breaks down the numbers for Jews fighting for other Allied countries: at least 500,000 served in the Russian Army, 40,000 or so throughout the British Empire fought for Britain, and approximately 35,000 for France.

While for the Central Powers, nearly 100,000 Jews served in the German Army, “and 12,000 were killed in action. German Jews were very determined to prove their loyalty to Germany, to the Kaiser,” Schwartz explained, and with “the overall population of German Jews at the time was probably around 500,000. So you had close to 20 percent of the total Jewish population serving. In the Austro-Hungarian Army there were around 275,000 Jews.”

Regardless of country or side, the driving factors for most Jewish enlistment were expectations and hopes around assimilation and demonstrating loyalty to country, while lingering expectations around emancipation also galvanized Jewish communities.

“In the debates about Jewish emancipation — granting Jews equality — dating back to before the French Revolution, the question was, ‘Can we really trust Jews to be good soldiers? Can we really trust them to be patriots?’ The argument was made that, ‘Look, Jews will be more loyal to their fellow Jews than they will be to people in this particular nation,” Schwartz explained.

One example of how complicated it looked may be exemplified in a photo of Jewish soldiers in the British army taken at the Western Wall in 1916, on the second day of Rosh Hashanah. According to JewishHistory.org, another photograph was taken on the first day of Rosh Hashanah of Jewish soldiers from the Austrian and German armies similarly posing at the Kotel. The photos are similar, a happy new year blessing for all, but the German and Austrian troops had travelled to Palestine to fight the British and help the Ottoman Empire.

In the United States, Schwartz says, “the popular reaction to involvement in this European war also unleashes a wave of nativism and anti-Semitism, resulting in immigration laws that cut off Jewish entry during a period when the situation of Eastern European Jews is becoming increasingly dire.” Continuing, that almost immediately the war “ushers in a period of Ivy League admission quotas and widespread distribution of anti-Semitic propaganda, like the Protocols of the Elders of Zion. These developments effectively arrest and reverse some of the progress that Jews had already made in the US.”

WWI curbed immigration across North America, and in Canada Jewish immigrants from Eastern Europe attempting to flee the violence and upheaval were now being refused entry. While the Treaty of Versailles was being drafted in 1919, formally ending WWI and mapping out a whole new era, the Canadian Jewish Congress was established. Their main business at the first meeting was the founding of the Jewish Immigrant Aid Society to assist Jewish settlers and help war-ravaged refugees.

“The war was an absolute catastrophe for the Jews of Eastern Europe,” Schwartz shared. With “the total death toll for Jewish civilians in Eastern Europe between 1914 and 1921 was more than 100,000, and I have seen estimates that as many 600,000 Jews who lived in the Russian Pale of Settlement or Austrian Galicia were uprooted.”

The great An-ski had witnessed the degree of that tragedy during parts of his ethnographic expeditions and when he went back with Russian forces on behalf of Jewish relief agencies, which he wrote about in his book, Churban Galicia. “They called it a churban — a destruction,” Schwartz says, “but this didn’t become cemented in the collective memory.”

The term churban, or khurbn, is a Yiddish word and was more often the term that most native-Yiddish speakers used after the Second World War instead of the word Holocaust.

Running parallel to the war was the Bolshevik coup d’etat of October 1917. Jewish communities were terrorized in the wake, scapegoated in Polish, Ukrainian, and Russian anti‑Bolshevik campaigns that killed approximately 100,000 Jews.

Writer Anna Issacs summarizes that although “World War II overshadows World War I in American Jewish consciousness, Professor Daniel Schwartz argues that it was the latter that shifted the arc of Jewish history – by fanning virulent anti-Semitism, and by motivating the British-Zionist alliance that led to the creation of the State of Israel.

Leeks slow-cooked in olive oil star in this hearty vegetarian main of lentils, lemon and herbs. These confit leeks are roasted and softened without browning, slowly releasing their flavor into the oil. The mixture could be spooned over baked potatoes or roasted chicken, but the lentils give the dish heft and bite, and the leek cream makes it extra special. If you can’t find French lentils, you can easily substitute other green or beluga lentils, or pearl barley or other grains. Serve this dish warm or at room temperature, and eat alongside some roasted potatoes for a complete meal, if you like.

Rancho Gordo’s Black Caviar Lentils might just be fantastic in place of the Le Puy. Just a thought.

The featured image shown on the main page is of Austrian and German Jewish troops at services during WWI. Image is public domain. 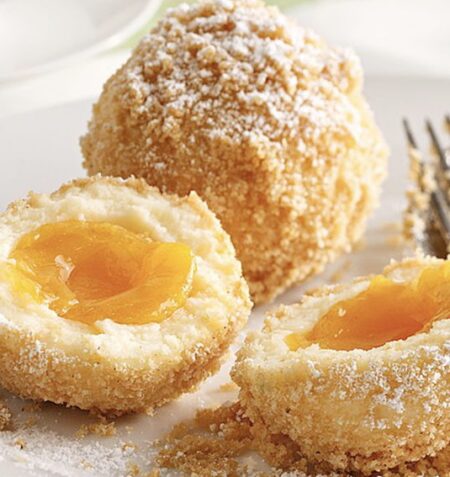 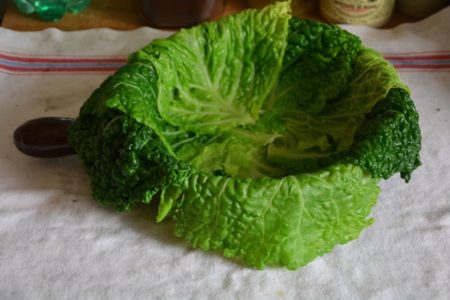 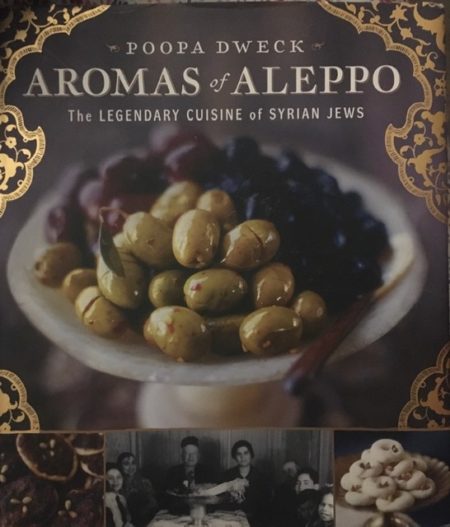