Copeland Marks (1921–1999) was an extraordinary food historian, another great 20th-century recipe hunter in the same league as Claudia Rodan and Diana Kennedy. Marks was an American writer and lecturer who specialized in what was, and, sometimes still is, called “ethnic foods.”

Marks wrote sixteen cookbooks, including The Burmese Kitchen (1987), The Varied Kitchens of India (1986), False Tongues and Sunday Bread: A Guatemalan and Mayan Cookbook (1985), and The Indonesian Kitchen (1981).

But it is Marks’ contributions to Jewish food history that is particularly special. For five years in the 1980s, Marks’ visited, or revisited in some cases, Jewish communities around the world collecting recipes and history.

Marks wrote Sephardic Cooking: 600 Recipes Created in Exotic Sephardic Kitchens from Morocco to India (1992) to coincide with the Spanish Inquisition’s 500th anniversary. He has easily created the definitive cookbook of Sephardic food.

Many of the countries included in this book on Sephardic cooking would not identify themselves as Sephardic. Complex Jewish histories extend to the dominant traditions in Yemen, Ethiopia, Soviet Georgia, Bukhara, and India. However, Marks considers them connected based on their relationship with Talmudic Baghdad rituals.

Marks is pictured in a synagogue in India on the right side, on one of several working travels throughout India.

Marks wrote of what exactly constitutes a Sephardic kitchen, “their inclusion is not only because of the exotic nature of their cooking but because they are not of the Ashkenazi of Europe.” It was a pretty bold step at a time when Judaism for so many only meant European culture, food and traditions. While Marks’ view was not uncommon, its roots in an Ashkenazi-centric worldview are outdated, but the recipes and stories he collected are certainly not.

Most of those Jewish communities are now gone or drastically reduced due to immigration. Estimates for India place the total of the Jewish population throughout the country at 5,000, with concentrated mostly in Mumbai, with 3,500 remaining there, down from over 30,000 Jews registered there in the 1940s. An estimated 70,000 Indian Jews live in Israel.

There will be more posts from Sephardic Cooking, but if you haven’t flipped through it yet, borrow or buy from the places that you like getting books from.

In India, three regions had concentrated Jewish communities, all with unique histories and specialized food traditions.

The Baghdadi Jews of Calcutta where originally Babylonian Jews. They left Baghdad, Iraq and established a thriving community in Calcutta by 1800.

The Bene Israel of Bombay on the Konkan peninsula claims to be the decedents of seven men and seven women who were the only survivors of a shipwreck on the coast of India having left Galilee in 175 BCE. The Bene Israel survived in isolation; Marks explains, “their decedents adopted the customs, names, dress and foods of their Hindu neighbors. Their language then and now is Marathi.”

The Indo-Aryan language of Marathi is the first language to roughly 83.1 million people and is the official language and co-official language in the Maharashtra and Goa states of Western India, and ranks 10th in the list of most spoken languages in the world. According to Marks, “all during their history, starting with the shipwreck, they clung to some fundamentals of Jewish tradition: the dietary laws, the Sabbath and holidays such as Rosh Hashanah, Yom Kippur and Simhat Torah among others.”

Marks also wrote of the “so-called Black Jews of Cochin in southwest India… one of three Jewish groups in that southwest city if India on the Arabian Sea.” The other two groups in the region are the so-called white Jews and the manumitted or emancipated slaves. The Black and white Jews worshipped in different synagogues. Marks writes, “the whites in their famed old Paradesi synagogue. But it is the Black Jews we are concerned with here.” And lucky for us that he is.

The Black Jews have a fascinating history and their eating habits are informed both by Jewish dietary laws and the intense heat and humidity of the region, meaning little meat or poultry is consumed. Yogurt is popular, and everything else is mostly vegetarian. The cooking is “spicy with the emphasis on ginger, coriander, mustard seed, fresh and dry hot chilli, fenugreek, cardamom and the ever-present curry leaves.” 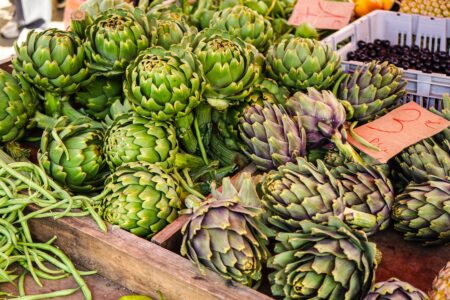